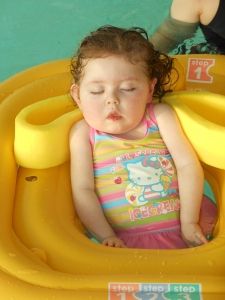 (This is Kirsty’s story, told first-hand by her mom, Korin.)

[dropcap]K[/dropcap]irsty was born on 21st February 2010 at exactly 41 weeks after a normal pregnancy and very easy delivery, Andrew and I were delighted to have what we thought was another gorgeous healthy baby daughter joining her big sister Heather who was 21 months at the time, however all that changed in the first 48 hours.

I first saw her having what we now know was a seizure when she was less than an hour old but realise that’s what it was and started telling everyone she had arrived and all was great. During my one night stay in hospital with Kirsty I became very aware that she wasn’t waking up to feed and when she did wake it was with a scream then within a minute or so she was sound asleep again. The next day we were desperate to get her home with her big sister completely unaware of what was about to happen.

Over the course of the first day and night we both began to think something wasn’t right as Kirsty still wasn’t feeding I was having to express into a cup and pour it into her mouth which she still wasn’t taking and she was excessively sleepy apart from that night where she’d have horrible screaming fits to the point we both ended up sleeping with her on our chest for hours as it was the only way to calm her. It was during one of these that Andrew thought she was having a seizure but shook it off as he just thought he was tired. It was only once she was in hospital that he told me this.

Along with the excessive sleepiness and not feeding Kirsty had started to have lots of jittery movements of her hands, arms and limbs. I remember commenting to my neighbour when she did it, “look that’s the odd movement Kirsty has been doing” but she shrugged it off as Kirsty wanting to look at the light from the window. At 12pm on Tuesday when Kirsty was just over 48 hours old a midwife did a home visit and Kirsty had dropped 10% of her birth weight (something that would normally send a baby back to hospital until feeding was established but it wasn’t mentioned). We told her about the constant sleeping, her odd movements and not feeding but she told us Kirsty was a completely healthy baby and she would visit again on Thursday. She did ask if I had a lot of drugs during labour as baby’s who were normally this sleepy it was because they were still recovering from that. I think it was that comment that really made me think that there was something wrong with Kirsty.

When the midwife left I asked my Andrew who is a Doctor what he would do if a parent came into his surgery with a baby who had Kirsty’s symptoms and he said he’d send them to hospital to be reassured so we took Kirsty to Glasgow’s Yorkhill Children’s Hospital. Any baby under 10 days old should go back to the hospital where they were born but Andrew said to cut out the middle man and go straight to the specialist children’s hospital. On route I kept trying to convince myself that Kirsty just needed fluid to help wake her up and then everything would be fine.

We took her to A&E and she was monitored in triage room and she did her odd movements there and within minutes she was taken straight to the resuscitation room. The registrar on call went to get the consultant and it was there that I saw the word ‘seizure’ on her notes and I became hysterical asking Andrew what that meant and if she was going to die and he of course assured me she wouldn’t but that that she might have had a brain haemorrhage or meningitis.

After lots of tests (lumber punctures, bloods and her first EEG a couple hours later we received the news that Kirsty’s brain was showing a Burst Suppression pattern and that she had a rare metabolic disorder, we were then told when she was 4 weeks old that it was Ohtahara Syndrome. That first night in hospital we were also told that Kirsty would die from this condition. We were even told to take her home over the weekend to get some memories with her sister as they thought she would pass within days.

However this did not happen and Kirsty has proved them all wrong by recently celebrating her 3rd Birthday in February. She has had some scary moments when we have thought we were going to lose her but she’s our tough little princess, who is absolutely amazing and a joy to be around. Since getting grommets in March 2011 her hearing has dramatically improved and she is beginning to recognise our voices and has started smiling and making lots of vocalisations to show she is happy or unhappy. She is now at nursery which she loves and gets to do things like taking part in a Christmas concert so even though she isn’t doing the usual milestones we expect when we have children we focus on new ones. Developmentally she is still around the newborn stage as most of her movements appear to be spasms or small tonic seizures.  We are very thankfully that she stopped having the 3 minute Clonic Tonic seizures in May 2011 although not sure why as the medication she is on has remained the same. Those were the ones that were horrible to watch and they caused so much pain. Kirsty’s main issue since March 2011 has been her chest she is often on oxygen and has recently started dropping her sats dramatically however thankfully it can usually be sorted with a position change.

It was just 2 days after her birthday that we received a letter informing us that the genetics study she was taking part in found a mutation in her KCNQ2 gene, we have had blood tests taken to find out if it’s genetic but it looks like it’s de novo. Kirsty became a big sister in March 2012 to a little brother who was born perfectly healthy.

I am delighted to have found this foundation and I hope that the research into this gene will help future children.